14 In Fabulous over Fifty/ Holidays 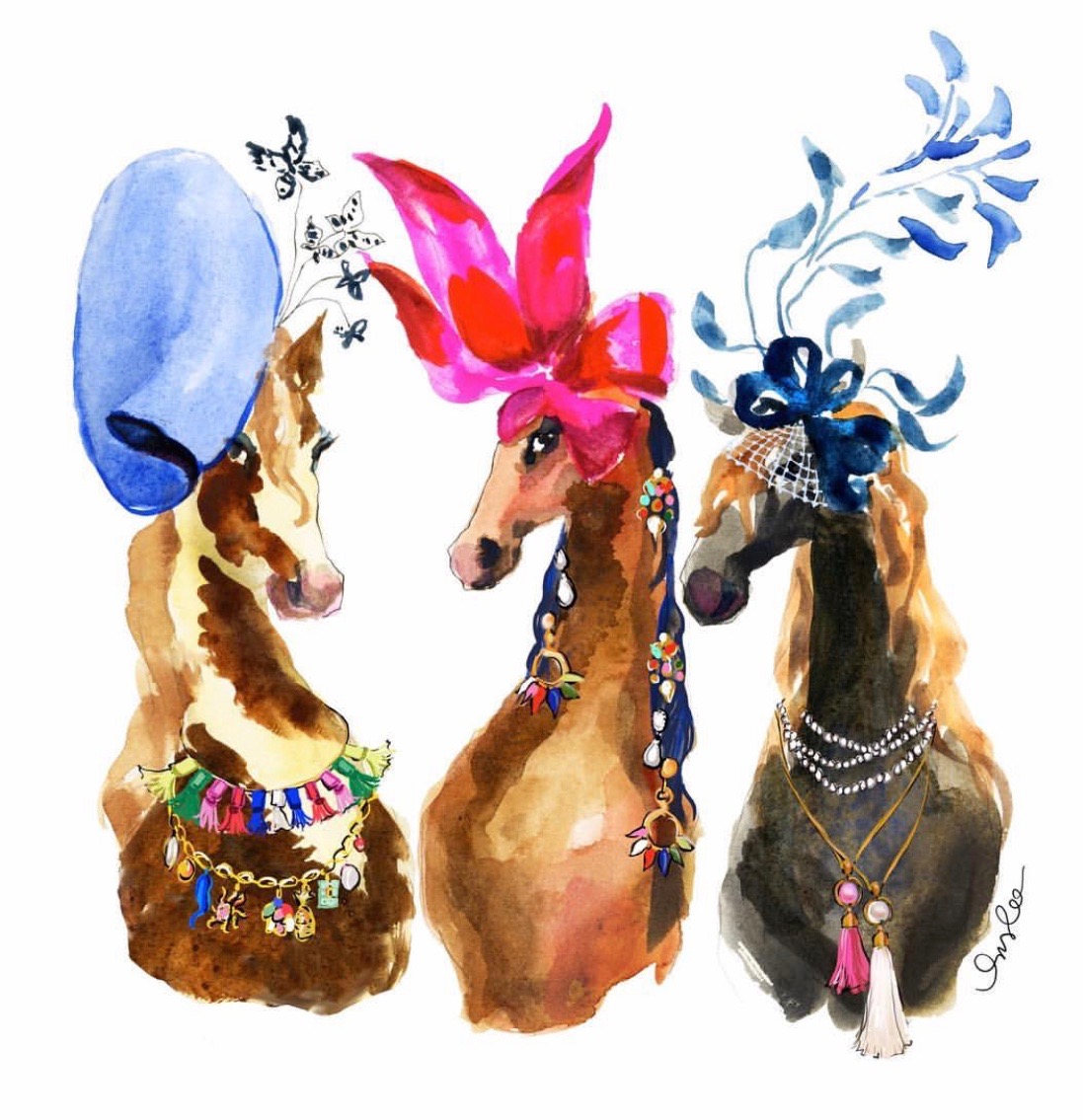 There are a few obvious signs that spring has sprung….we’ve got April showers…soon to be May showers…seriously – Mother Nature give us a break.

Tiger Woods won his 15th major at the Masters…

But the Mother of all spring celebrations for this little Corner House is the KENTUCKY OAKS & KENTUCKY DERBY!!! 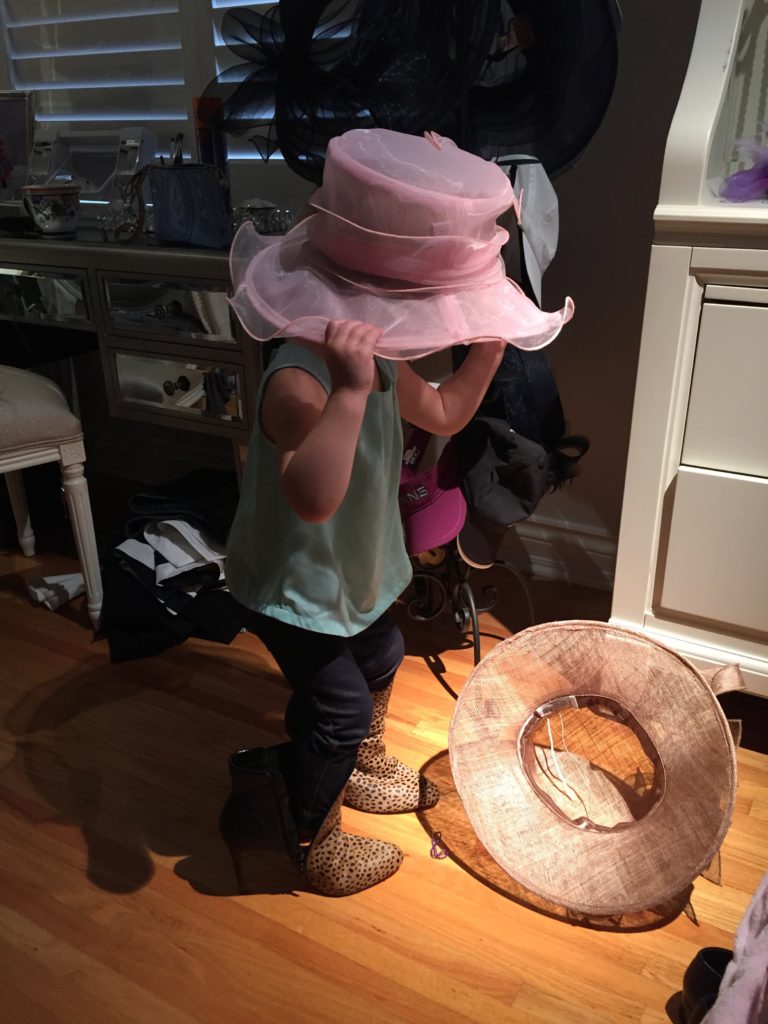 For Steve, Derby day is all about the race. For others…it’s all about picking the right hat!

Let me recap a few years ago in 2013 when we had a horse in the Kentucky Oaks (this is a race for the world’s fastest, 3-year-old,  female horses, they run the day before the derby)  we got to walk our horse down the track at Churchill Downs in Louisville, Kentucky. Her name was Silsita and she was 50:1 and to clarify we were not the sole owners of Silsita. We were part of Eclipse Thoroughbred Partners where you can buy a portion of the horse…fractional ownership. Riding her was Gary Stevens. You might remember him from the movie Seabiscuit? He was the jockey that rode Seabiscuit when Tobey Mcguire was in the hospital. 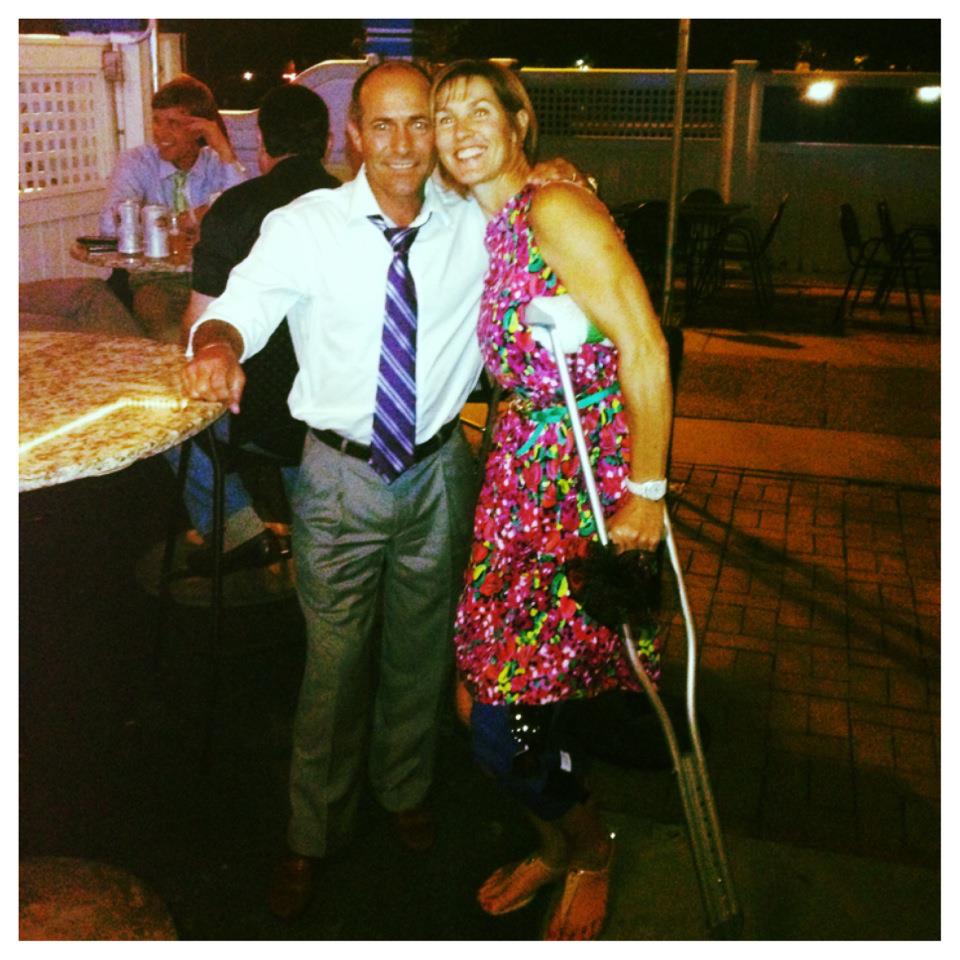 This is a photo of Gary Stevens and me in Saratoga NY. Who BTW follows me on IG…Just sayin’

This isn’t an amazing story where Silsita shocked us all and won the Kentucky Oaks…nope…she finished the way she started…a long shot…LOL…but I had on a new pink dress and pink hat and waved at 113,820 fans. (to be exact) And by fans, I mean people in the stands there for the races…but for that fleeting 15 minutes, I waved like I was a derby hopeful …and they were there for me… and they were my fans!!! It didn’t matter that our horse came in dead last – ha ha…it was the experience of it all.

This year we have partial ownership of a horse called Pointe of Honor with the same group as the 2013 horse Silsita: Eclipse Thoroughbred Partners. Having said that she didn’t actually get enough points in the ‘qualifying races’ (explanation below) BUT…IF and it’s a big IF there are 3 defections (official horse lingo for scratches/horses scratched from the race for various reasons) Point of Honor COULD be running in the Kentucky Oaks…in which case…good heavens…I’ve got to go shopping!!! 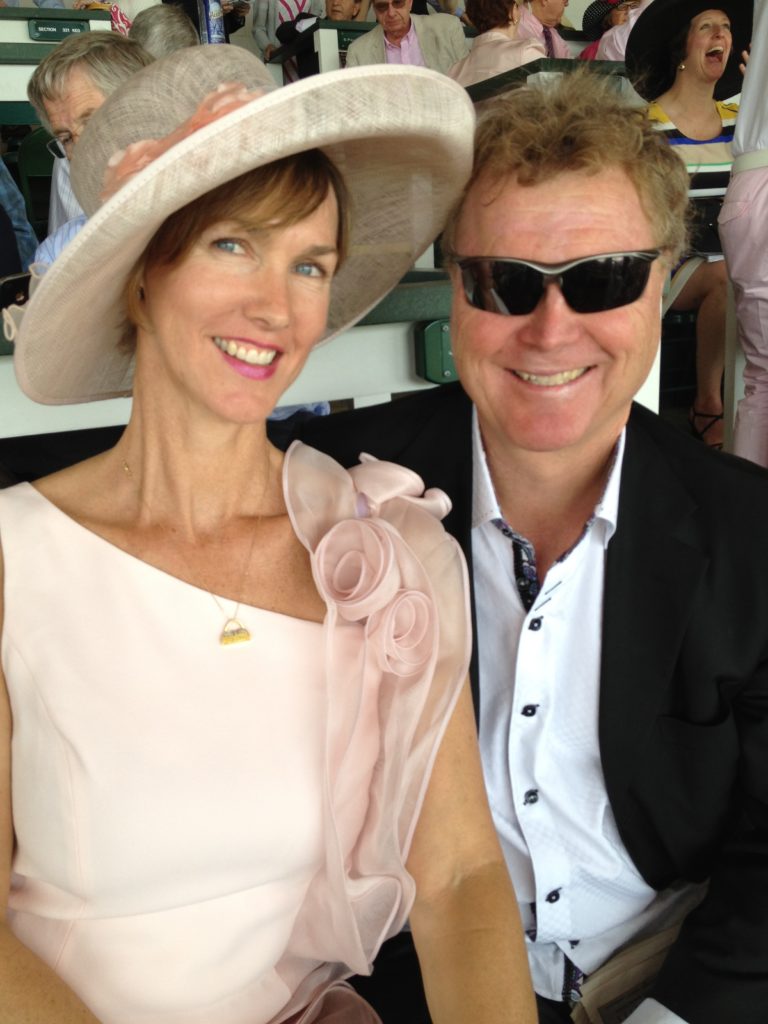 This is Steve and me at the Kentucky Oaks. It’s hard to get a photo together when wearing a hat!

This year is the 145th year of the Kentucky Derby. You may have heard it referred to as the ‘run for the roses’. This is on account of the winning horse being draped in a blanket of red roses.  The race is also referred to as the most exciting two minutes in sports. I am sure my neighbours think Steve is having a complete breakdown with the yelling that goes on for the entire two minutes of the 1 ¼ mile race. Most Sundays when he watches the races I close all the windows so nobody calls the police on us…it does get really loud. 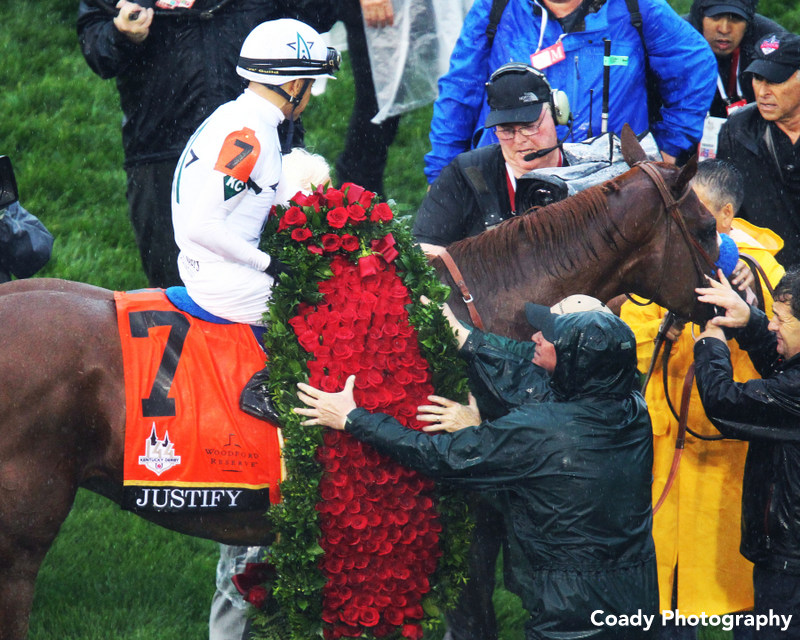 This is last years Derby winner; Justify, ridden by jockey Mike Smith, below…Look at that smile! 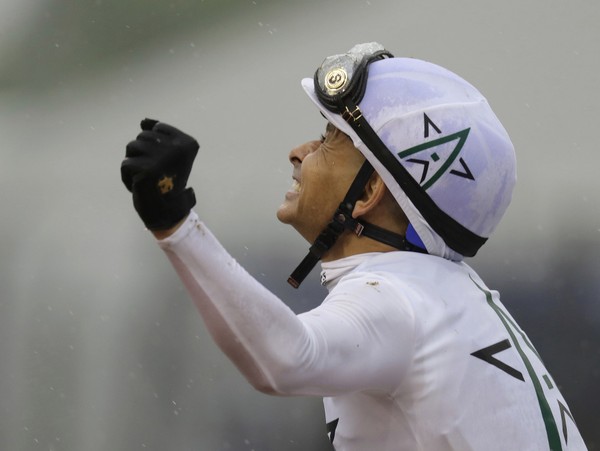 In order for a horse to earn a spot in the coveted starting gate at The Kentucky Derby, 20 horses must travel the ‘Road to the Kentucky Derby’ a series of designated races at tracks across the country and around the world. Points are awarded for the top four finishers in each race. There are 35 races in all and the 20 horses with the most points get in.  Did I mention the horses have to be 3 years old….and all horses have their birthdays on Jan 1 every year?

Kentucky Oaks horses are chosen the same way the only difference is there are only 15 chosen horses. 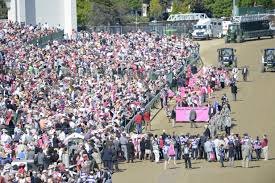 This year marks the 11th year of the Survivors Parade at the Oaks. It is a march of breast and ovarian cancer survivors and it is a sea of pink!!  Notice the pink in the stands? Everyone wears pink to show their support. In order for a fan to participate, they have to nominate themselves, a relative or a friend who has survived by sharing their story. 145 survivors will be chosen to walk in the parade prior to the 145th running of the Longines Kentucky Oaks race…..a bit of a big deal!!!

You cannot have a derby without fashion! Whether it’s the Oaks or the actual Derby, fashion is not new. It has been a staple of the races from the beginning of its time. 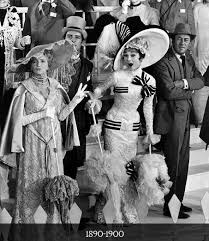 1890/1900 – Tall necklines and elegance for ‘fancy wear’. During this period the day time wear for women was called sportswear. The dresses were wide at the bottom so women could ride bikes. Judging by the young lady on the right…when dressing up….flaunt what you got girl!! 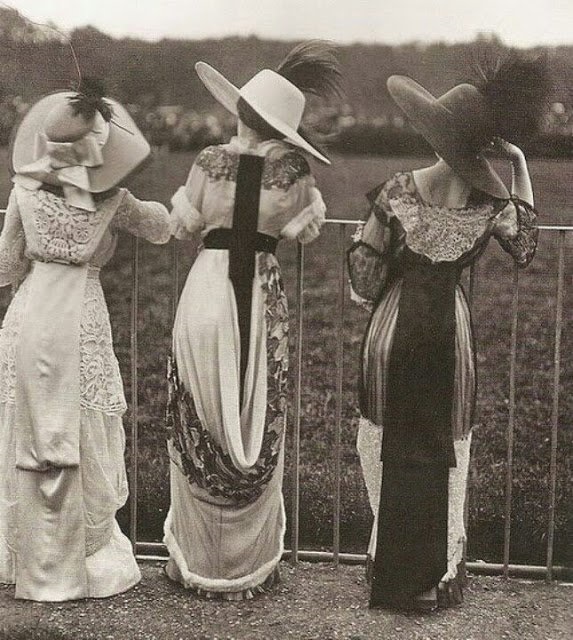 1910 – In the first half of this decade, women wore ‘rich and exotic opulent’ dresses that hit the ground to cover their ankles. These dresses were called hobble skirts and actually caused some casualties. One lady was killed by a loose racehorse in Paris. She couldn’t get away fast enough. Some women tied their knees together so they couldn’t take a long stride and rip their skirts. Clearly, these were designed by a man? LOL 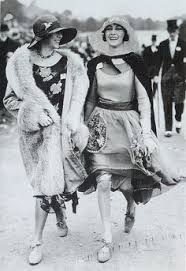 1920s – was a generation of women who bobbed their hair, partied to jazz and flaunted their disdain for what was considered acceptable behaviour! 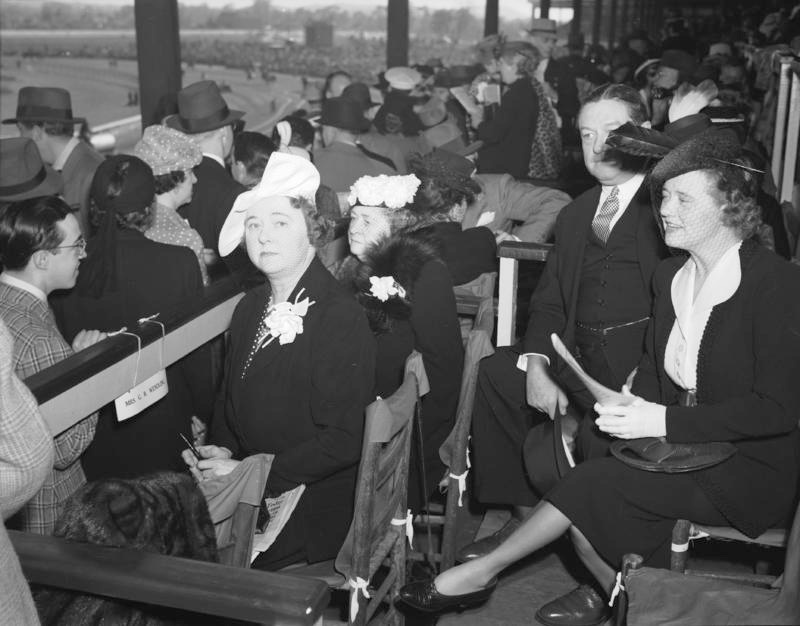 1930/40s – It became more popular for women to wear suits rather than dresses. Hats were simple and women started wearing fascinators. Suits were cinched in at the waist, shoulders were large and dresses crept up towards the knee compared to the 20s due to the rationing of fabrics caused by the war. 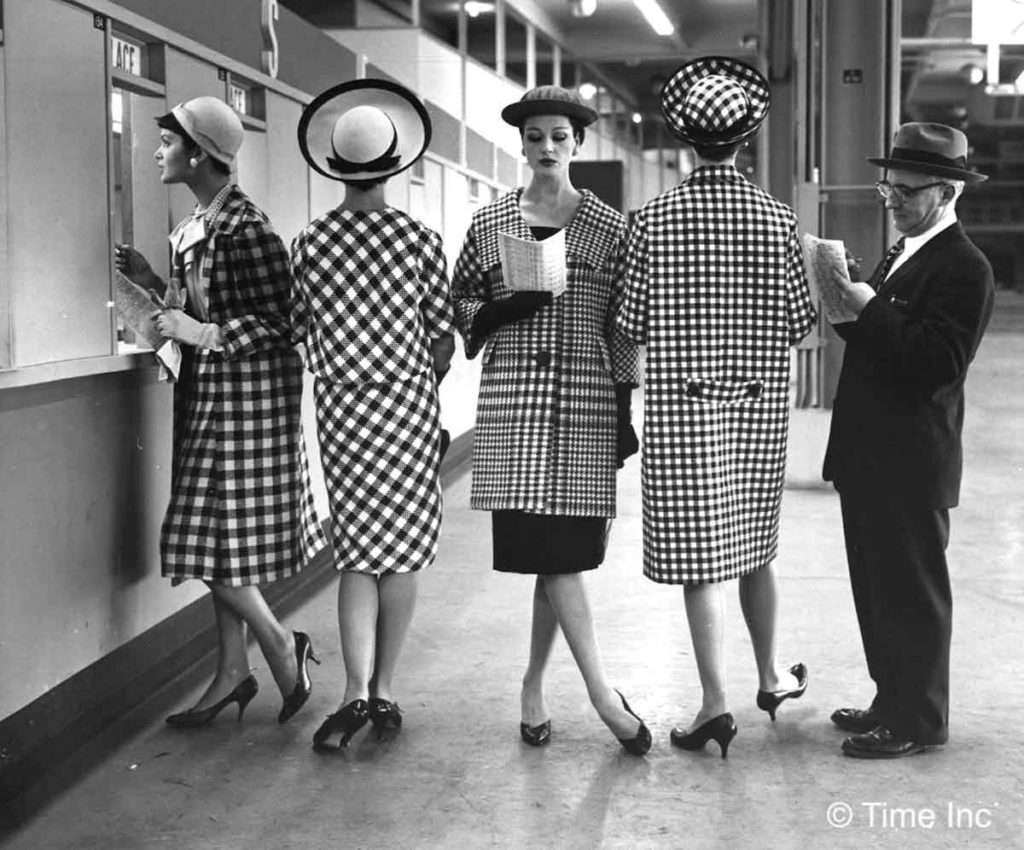 1950s – While the young women of this time were sipping grape kneehighs in their bobby socks and cinched in waist dress with the tight bust line the society women or savvy-mature woman opted for a classic straight line, fitted dress or skirt with a matching jacket, elbow length gloves and always the classic heeled pump. One of my favourite fashion eras. 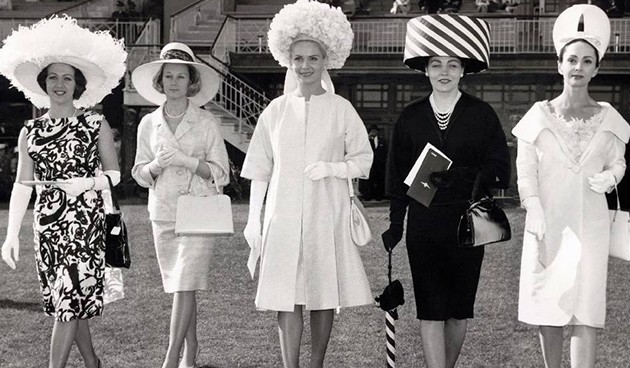 1960s – The younger women of this generation might have been wearing go-go boots and mini shift dresses but with the opening of Millionaire’s Row (provides guests with an indoor dining room and private platform for premium viewing of the race) society women’s hats became more of a statement than any other time… their dresses may have inched up a little bit from the ’50s but these women never lost their elegant style. Their ensemble matched from head to toe…. think of Jacqueline Kennedy. 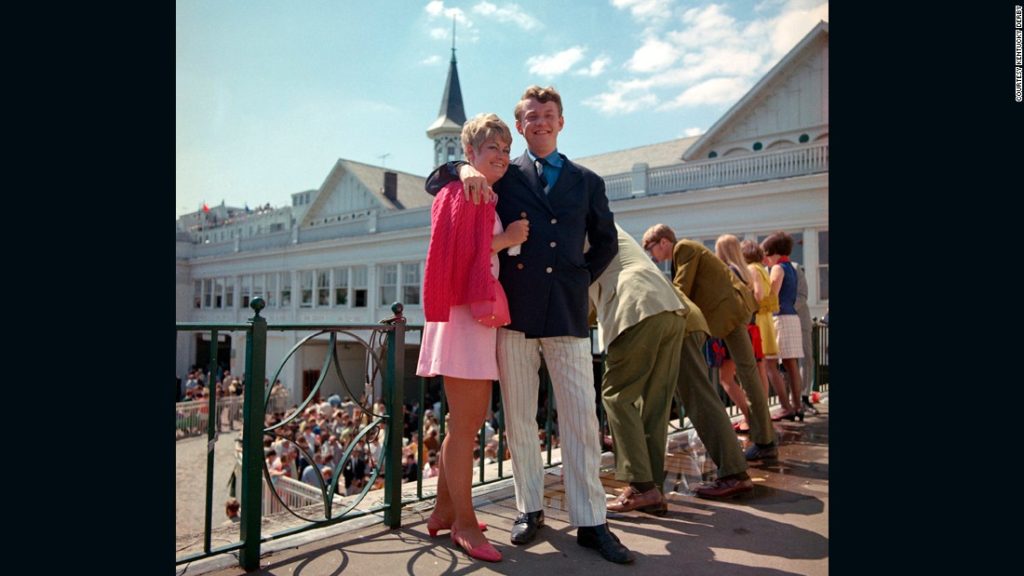 1970s – Notice no hats on the ladies…this was a time when women were making a stand and breaking away from tradition even at the Derby.  There were no more rules in fashion. Simplicity and bright colours were the rage. And who didn’t own a mood ring? 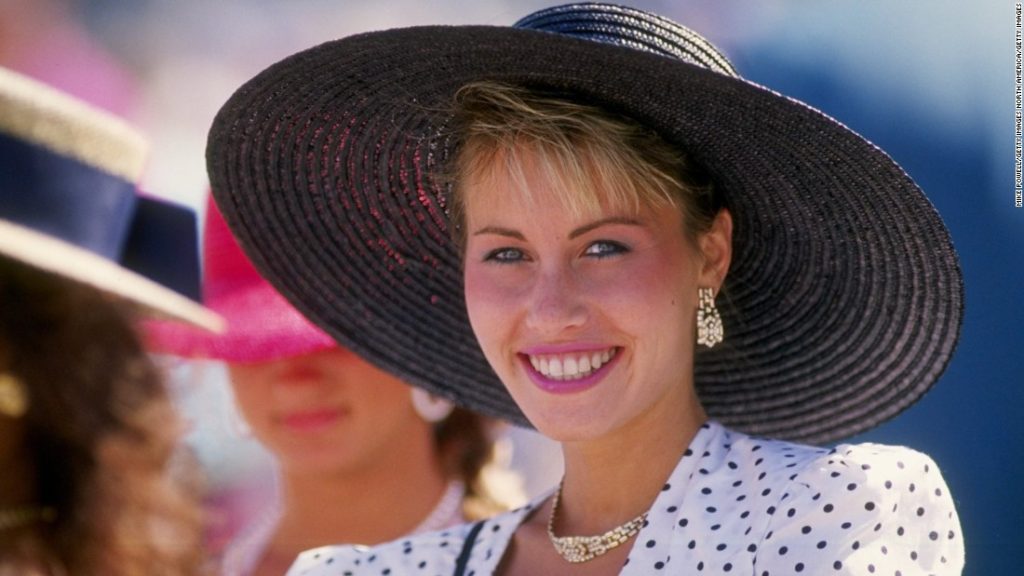 1980s – everything was ‘the bigger the better’ big hats, big bangs and big shoulders! What a change from the decade before. Oh, the shoulder pads worn by Linda Evans and Joan Crawford on Dynasty!!! 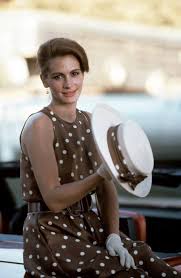 1990s – This isn’t an actual derby picture…but it is Julia Roberts in Pretty Women and this could easily have been a derby outfit. I have spent many hours looking for the perfect brown polka dot dress!!! 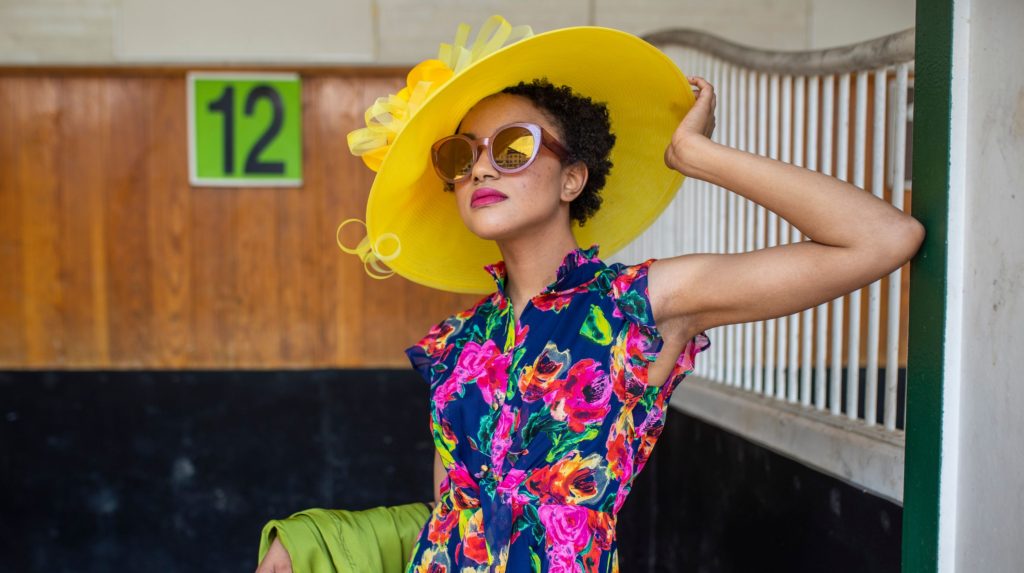 2000 + has been all about bright colours, elegance and of course, the hat has taken centre stage again. A hat at the races is said to bring good luck…so much so…that men are starting to wear them more and more as well.

Follow along this week for a couple of more Kentucky Derby posts!

What was your favourite fashion era? Leave a comment below!

You can see more of her work at www.inslee.net Follow her on IG and her FB page Inslee Fariss 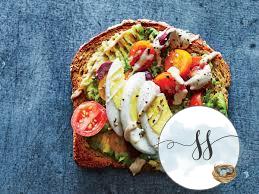 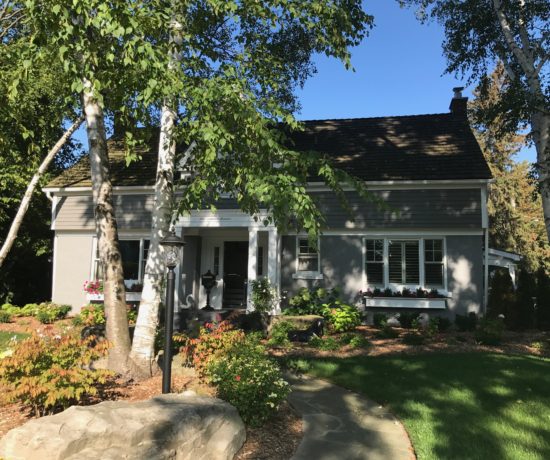 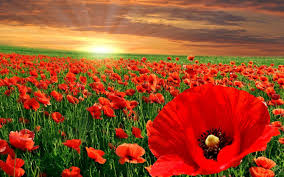